After a rewarding and unparalled relationship with Jules Olitski that lasted over forty years, and, more recently, in the championing of his legacy, Yares Art is honored to announce that it will assume the exclusive representation of the artist’s Estate in the United States. On this occasion, Jules Olitski: Color to the Core: Paintings 1960-1964 celebrates the artist’s work and underscores this lasting collaboration.

Nearly a century after his birth in 1922, Yares Art pays homage to the legendary artist with a show of his groundbreaking works from the early 1960s. These large-scale abstract compositions—often referred to as the “Core” paintings—feature imposing, rudimentary shapes in brilliant colors that emanate from monochrome backgrounds of dark or dramatically contrasting hues. The works of this period, which also anticipated the later famous “Spray” Paintings of the later 1960s and ’70s, were the first to bring Olitski national recognition.

Among the exhibition’s many highlights, Fanny D (1960) centers on a group of four irregular, circular shapes in turquoise, yellow, blue, and black, set against a mauve background. The lively orbs appear to be nestled within a wide circular band whose plush pink tone contributes to the work’s intensely sensuous color. Also on view, Lucy’s Fancy and Basium Blush (both 1960) are classic examples of the period, in which large cellular shapes in bright colors, trimmed in bands of contrasting hues dominate the centers of the canvases. They deliver an almost super- graphic visual charge. In each work, the circular forms appear to press against all sides of the canvas, as if the painting’s rectangular format can barely contain their energy.These magnetic works are among the early experiments in abstract painting that came to be known as Color Field Painting, a movement for which Olitski is internationally renowned, and still regarded today as one of its principal and most influential leaders.

Jules Olitski was born Jevel Demikovsky, March 27, 1922, in Snovsk, Soviet Russia, (now Ukraine), a few months after his father, a commissar in the army, was executed by the Soviet government. He immigrated to the United States in 1923 with his mother and grandmother and settled in Brooklyn. In 1926, his mother married Hyman Olitsky, a widower with two sons. A daughter was born in 1930. (The “y” became an “i” in 1951 when it was misspelled on an exhibition announcement). An exhibition at the 1939 New York World’s Fair, featuring works by Rembrandt, inspired Olitski to become an artist. In 1940, he was admitted to the National Academy of Design in New York and, in the evenings, he attended the Beaux Arts Institute from 1940 to 42.

Olitski served in the army during World War II, after which he settled in New York. In 1949, he moved to France on the G.I. Bill where he studied at the Ossip Zadkine School and the Académie de la Grande Chaumière in Paris. There, the artist held his first one-person show at Galerie Huit in 1951. Olitski returned to New York in May of that year and received his BA from New York University in 1952. Six years later, in 1958, his first New York solo exhibition opened at the Zodiac Room, Alexander Iolas Gallery’s contemporary art space. During this time, he met critic Clement Greenberg, who subsequently invited him to participate in a group show at French & Company. In 1961, he was invited to participate in the Pittsburgh International Exhibition of Contemporary Painting and Sculpture where he was awarded a prize, garnering further recognition of his work.

Olitski taught at Bennington College in Vermont from 1963 to 1967, and during his tenure there, in 1966, the artist represented the United States in the 33rd Venice Biennale alongside Helen Frankenthaler, Roy Lichtenstein, and Ellsworth Kelly. The following year, he won the Corcoran Gold Medal when his work was shown at the 30th Biennial Exhibition of Contemporary American Painting at The Corcoran Gallery of Art, Washington, DC. Remarkably, in 1969, Olitski became the first living American artist to be given a one-person exhibition at the Metropolitan Museum of Art, where he exhibited large spray-painted aluminum sculptures. He was inducted into the Academy of Arts and Letters in 2006, and he was awarded the prestigious Skowhegan Award for Painting in 2007. Olitski exhibited extensively both nationally and inter- nationally throughout his career, and he resided between New Hampshire and Florida for the last three decades of his life until his death in 2007 at age 84.

Jules Olitski, Color to the Core, Paintings:1960-1964 is accompanied by a fully illustrated catalogue with essays by Alexander Nemerov and Patricia Lewy, and an introduction by David Ebony. 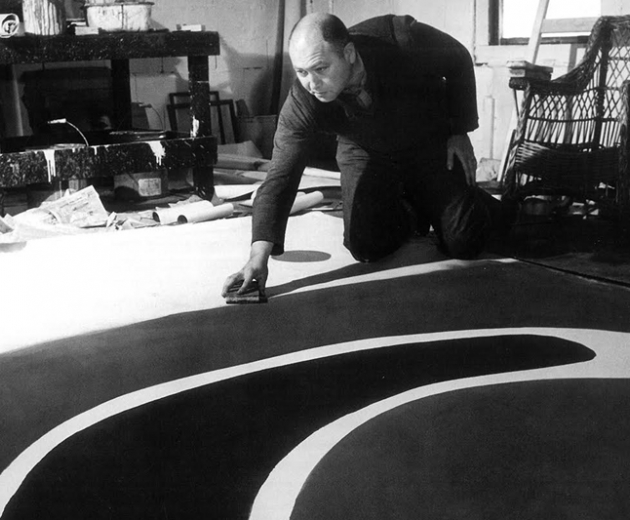 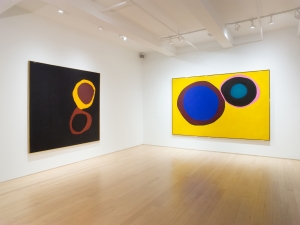 Olitski’s paintings were racing at the fore of their moment, as if the artist could see ahead to the psychedelic biomorphs later emblazoned on headshop posters. 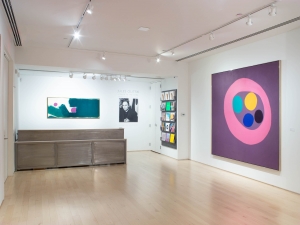 Olitski's "Core Paintings:" As Others See Them

Catalogue essays for commercial galleries are a special form of literature.  Although their writers are frequently referred to as "critics," these writers do not criticize in the sense that reviewers for independent publications might.  As a rule, too, their essays are expected to focus on the works that the gallery will be displaying in this particular show, and to correlate their remarks with the presentation itself. 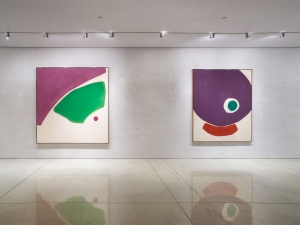 The Great Beginning of Jules Olitski

The artist’s earliest Color Field paintings, with their indomitable colors, austere compositions and wild pictorial spaces, are among the movement’s signal achievements. 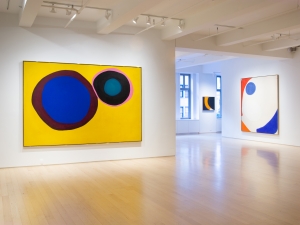 I don't have much to say about "Jules Olitski: Color to the Core: Paintings 1960-1964" at Yares Art on Fifth Avenue (through January 30).  That is partly because I have often written about Olitski, and his enormous talents are well-known to many if not most of my readers. It is also partly because I want to post this review as early as possible in the new year, in hopes of alerting more viewers in time for them to get to the show itself.  Let nobody think I don't admire it!  Au contraire, I found it sensational, a terrific feast for the eyes and strongly recommended in fair times or foul.  Don't miss it! 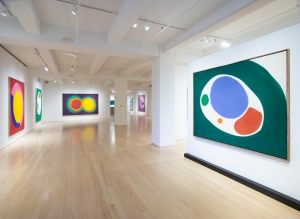 On “The Fullness of Color: 1960s Painting” at the Solomon R. Guggenheim Museum & “Jules Olitski: Color to the Core” at Yares Art, New York.