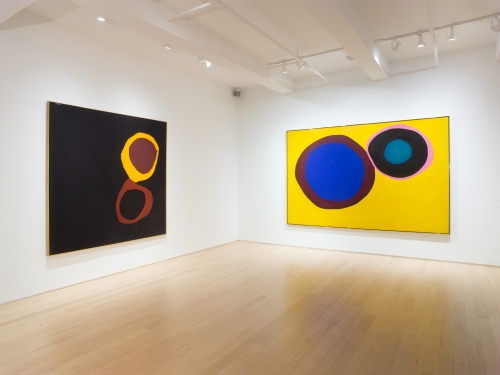 Jules Olitski (1922–2007) was born in the USSR, shortly after his commissar father was executed by the Soviet government. His mother emigrated to the United States, settling in Brooklyn, and when Olitski was in his teens he received classical art training, having been influenced by Rembrandt paintings he saw at the 1939 New York World’s Fair. By 1940, the young immigrant was studying life drawing and portraiture at the National Academy of Design, on Amsterdam Avenue at 109th Street.

Olitski served in the army during World War II and eventually landed in Paris on the G.I. Bill, where he began delving into modernist art theory, which led to a period of painting blindfolded as a way to push beyond his accomplished academic skills. The expressionist images and outlined areas of robust color in these works would give way to darker abstractions. Olitski moved back to New York in 1951, studied at NYU, and then found a gig teaching. Inspired by his students’ drawing boards, he began painting monochrome fields with energetic, contrasting marks at the edges. Late in the decade, he returned to strong colors, using rollers and sponges to sweep across the canvas, techniques artists such as Helen Frankenthaler and Morris Louis had pioneered a few years earlier. But as the canvases in “Color to the Core: Painting 1960–64” reveal, the maturing artist’s vision of intense hues arrayed in flat, vaguely organic circles and halos owed a debt not only to the delicate stainings of the Color Field school and the rarified gestures of Abstract Expressionism, but also to the clarion compositions of the burgeoning Pop Art movement.

Bold as a billboard, the 10-foot-wide Fair Charlotte (1961) might be cells dividing or celestial bodies locked in close orbits. The right disk could be a cut-away scene of a planet, with a smoky blue core, black mantle, and pink crust. The rusty ring around the dark blue center of the left-hand orb just kisses its companion, adding formal exuberance as they seem to rumble around the burnt yellow background.

In another work, a brown oval weighted by a red dot plunges down a green, seven-foot-high rectangle, looking like an olive in a glass, a notion in tune with the playful title, Patutsky Jazz (1963). The layout is as direct as a subway poster. But a triangle of blank canvas in a lower corner echoes an oscillating aura around the olive shape, changing object into environment — figure and ground cavorting like acrobats.

Olitski’s compositions might at first seem blunt, as in the two black blobs rollicking across the bottom of a gray-green ovoid ringed in purple, reminiscent of a pig’s snout (Passion Machine, 1961). But that impression dissipates with the sense that one of the black forms is distending its purple shell, conjuring forces as volatile as Rubens’s Venus and Adonis at the Met — desire constrained by events.

Rubens had the advantage of following the Renaissance, which allowed him to advance on his predecessors’ formal and psychological glories. Similarly, Olitski came along at a time when he could ingest the breakthrough aesthetics of the Abstract Expressionists — their explorations of scale and bodily gesture as well as their quest for inspirations that ranged from the deepest wells of the psyche to nature’s most elemental forces — to which he added his own bright-hearted dynamism.

A massive orange wedge in Wet Heat Company (1963) bears down on a burgundy block that seems the last protection for a small green orb floating in a lower corner, a contest as unbalanced as Sun vs. Earth. Yet shifts of taut edges to softer focus belie the bullying proportions, as the shapes nestle with syncopated grace.

Olitski’s paintings were racing at the fore of their moment, as if the artist could see ahead to the vivid patterns and psychedelic biomorphs that would be emblazoned on headshop posters later in the decade. (Indeed, in the 1970s Olitski married Kristina Gorby, a cutting-edge fashion designer whose East Village shop was a mod Mecca in the ’60s — Janis Joplin wore a Gorby creation at Woodstock).

In all the works, Olitski takes care to align a straight perimeter to a curve here, contrast a warm concavity to a cool bulge there — sly subtleties within grand expanses. The black field of In My Old Tin Lizzie (1961) is adulterated at the top-left edge by a bit of bare canvas, a scruff of light at the horizon. On the right half of the canvas, two large rings lock together like handcuffs, one hollow with the dark background showing through, the other tarnished yellow with a lavender brown belly. They float in the void, seemingly not the seven-foot-breadth of the canvas away from that high-up hint of dawn, but more like seven leagues distant. Was that tiny glimmer an accident that Olitski then opted to leave as a decision? Like most of these spirited pictures, the sense is that the light and the shapes could have journeyed anywhere, but somehow ended up in just the right place.

Link to the Village Voice article
Back To Top