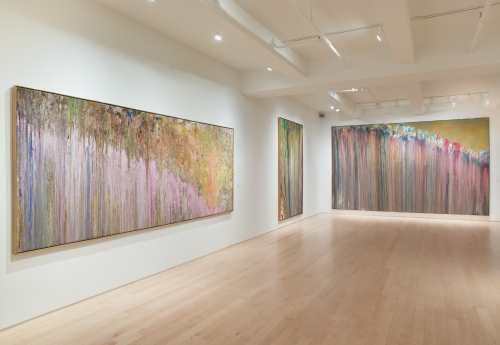 Larry Poons has always been something of a maverick who trusts his instincts and never minds fashion. He first became known in the early 1960s for stripped down “dot” paintings whose combination of evenly stained color, punctuated with small precise lozenges, aligned him with Color Field, Minimalism and Op Art in one fell swoop. By the late 1960s, he had gone heavy-duty, creating thick, creviced topographies of paint poured on horizontal unstretched canvases soon designated the “Elephant Skin” series.

By 1971, the canvas was back on the wall, and Mr. Poons was throwing paint from cans and buckets, always aiming high. It ran down the surface in thick rivulets as funkily literal as they are associational. Words like vines, rain, waterfalls and fountains run through the mind in this rare and wonderful show, titled “Ruffles Queequeg + The Throw Decade 1971-1981.” (The reference to Queequeg of “Moby Dick” fame is a transitional wavelike work.) I can imagine these pieces holding their own against Monet’s “Waterlilies.” In an essay in the catalog, Frank Stella, the painter and Mr. Poons’s friend, calls him “Mr. Natural,” which seems accurate.

Link to the New York Times article
Back To Top